Here, finally, are some pics and thoughts from Saturday's presentations at the OSU Festival of Cartoon Art.
In reviewing the pics I shot at the festival, I have discovered that, while I attended every presentation, I forgot to take pictures during many of them. Perhaps I was too engrossed :-) I also find that I did not take a single picture of cartoonists randomly hanging out together. I may have been either too inebriated or too hung over - a lot of the hanging out time is kind of fuzzy. 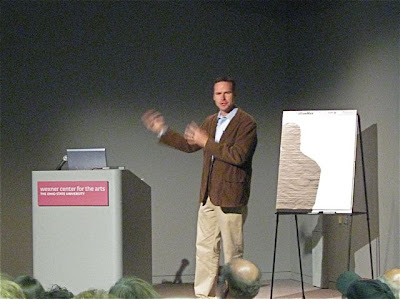 First up Saturday was Steve Breen with "Editorial Cartooning: Humanity's Last Hope". Steve was very informative and entertaining, showing slides from his childhood and a number of examples of his work. In the following series of photographs, there are two versions of each cartoon - showing the changes Steve made after roughs, to increase the editorial impact of the image. 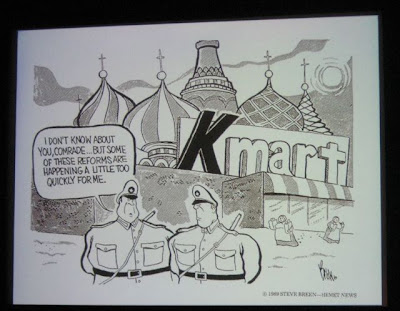 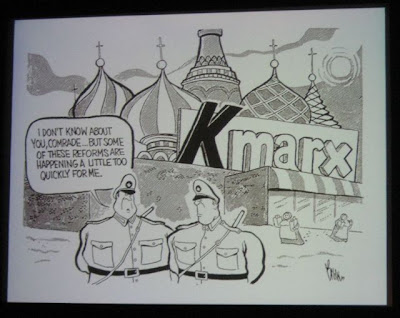 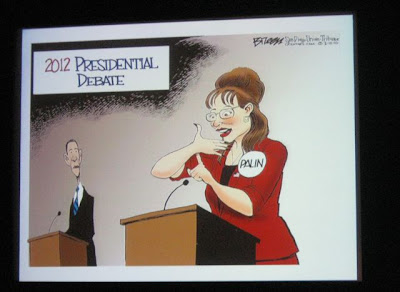 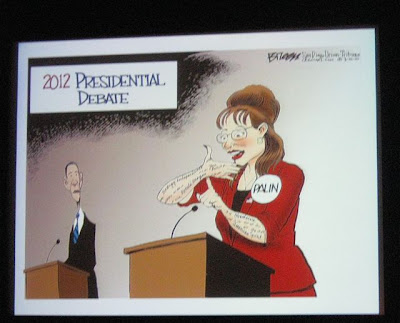 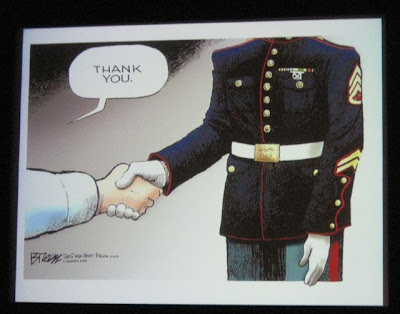 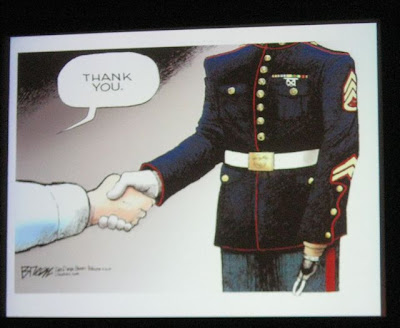 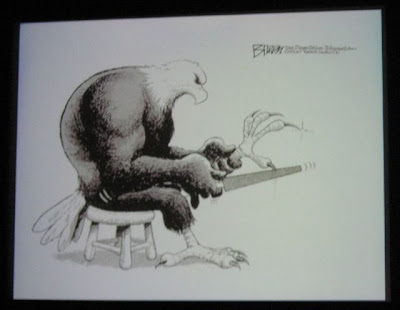 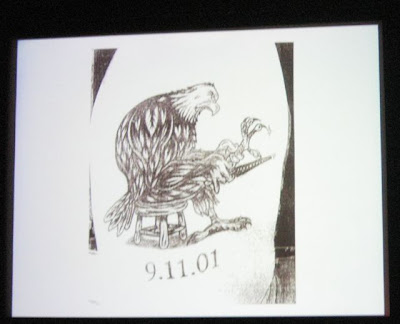 It spawned t-shirts, flags and a million other things, including this gentleman's tattoo 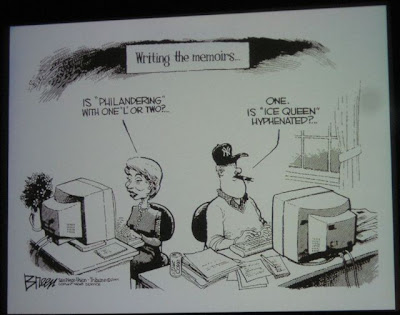 This cartoon got a huge laugh from the audience.
And that cartoon brings to mind my favorite moment from the presentation. Steve stated that, while politically he thinks of himself as a moderate with conservative tendencies, he sees his job as one that requires that he skewer absurdity wherever it raises its head. This resonated strongly with me because Edison hits on political and editorial themes frequently and John works very hard to stay non partisan and go after whoever seems to deserve it at the time. This approach has irritated some readers of the strip who feel that they can't get a bead on his politics. They don't seem to get that - editorial cartooning, even when in strip form, is a form of journalism. As such, it is important to take jabs at all idiocy, even if the idiot in question is someone you voted for. Interestingly, I have only found this criticism of John's work in conservative quarters.
Steve closed with some Q & A and this sketch of Obama. 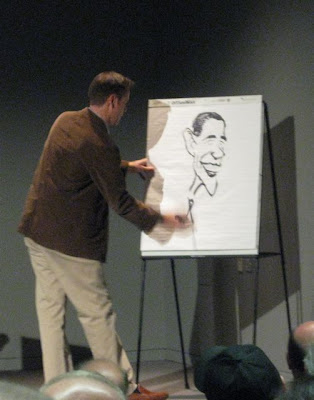 The next presentation, "So Far, So Good" was by Jan Eliot of Stone Soup and must have been completely engrossing to me because I forgot to take a single photo. It was a terrific talk, Jan ran down her origins in the world of advertising illustration and how she evolved some of that work into a career in cartooning that led to syndication. A lot gets made of the contributions that Cathy Guisewite and Lynn Johnston made to the expansion of women's topics on the comics page. And a lot should be made of them - Cathy's depiction of single women's angst and Lynn's depiction of true to life family scenarios - but, as far as I know, no comic on the page has spoken so bluntly from the point of view of the single mother. And the authenticity of Jan's voice is unquestionable, as single motherhood is a track she has lived and knows only too well.
I especially enjoyed the details she offered on a series of cameos she did in her strip a while back. Several other female comic characters arrived at a baby shower - Cathy, Connie from Zits, Alice from Dilbert, among others.
Jan was followed by a panel dedicated to the memory of King Features comics editor Jay Kennedy. The panel consisted of Brendan Burford (Jay's successor), Patrick McDonnell (Mutts), Bill Griffith (Zippy the Pinhead), and Matt Groening (The Simpsons, Life in Hell). Jay was a giant in the comics business and almost every cartoonist I have met so far has a story of their interaction with him - whether they signed with King features or not. It was clear that, while each of the panel members had different connections to Jay - some through his work at King, some through his interest in underground comics - they all considered him not only a respected colleague but a true friend. Jay's family was also in attendance, making the presentation even more meaningful. Often the panelists spoke directly to the family about the influence Jay had on their lives. 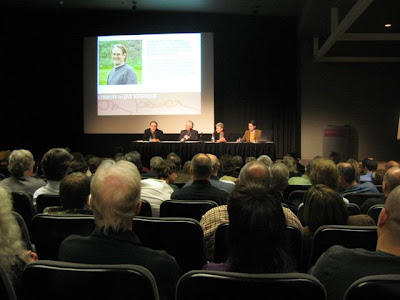 The Panel with a photo of Jay 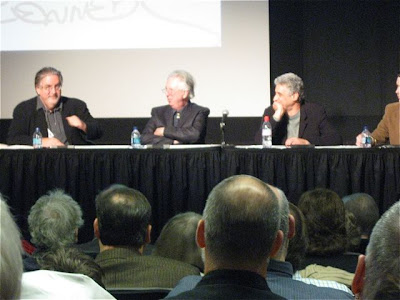 Matt Groening tells how Jay told him to stop drawing rabbits and start drawing humans. Good advice - otherwise, no Simpsons.
We then broke for lunch over at the Union, affording us a great chance to see John Read's latest incarnation of "One Fine Sunday in the Funny Pages". 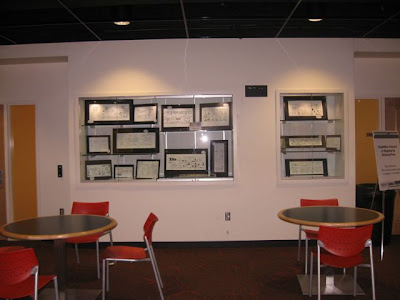 Baby Blues, Zits, and Agnes among others. 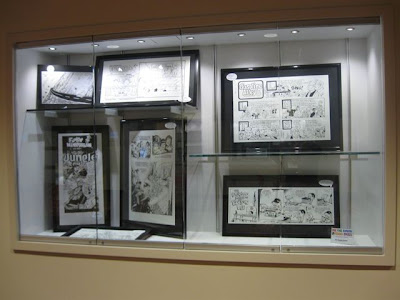 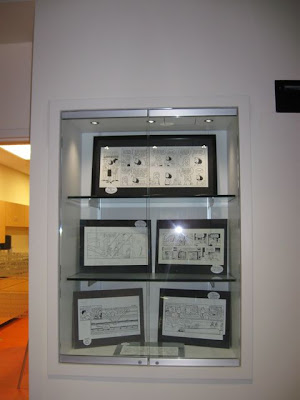 Look closely and you'll see Retail, Crankshaft, The Flying McCoys, Cleats and Tank McNamara.
Next came a presentation by Gene Luen Yang "American Born Chinese". This was another event I forgot to photograph but it was fascinating. Gene detailed how growing up with a foot in two cultures led to his graphic novel. He showed several slides from traditional chinese folklore and also told several stories from his own childhood. Wonderful work - definitely worth checking out.
Gene was followed by New Yorker cartoonist Roz Chast who's talk was titled "Theories of Everything, and Much, Much More". I've been reading Ms. Chast's work in the New Yorker for just about as long as I can remember. She talked a little about her childhood and influences the chief of which seems to have been a legacy of worrying. Worrying about fatal illnesses, freak accidents, and general bad karma. One of my favorite lines came from a cartoon where one voice says something like,"He was sitting on the sofa, and BOOM! he dropped dead." I have to paraphrase because all I remember is the "Boom!" part. And this would be from all the folks in my childhood that were fond of recounting unexpected disasters, all of which were punctuated by that "Boom!". 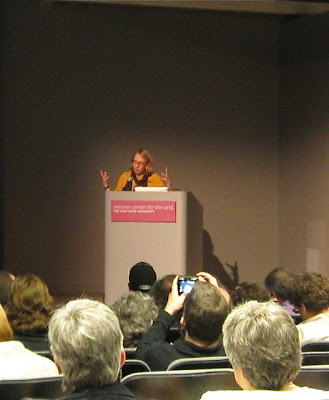 Ms. Chast describing her worry filled youth. In this shot, she reminds me a little of Woody Allen. Come to think of it, if Woody Allen had ever done cartoons, they would probably have been a lot like Roz Chast's. 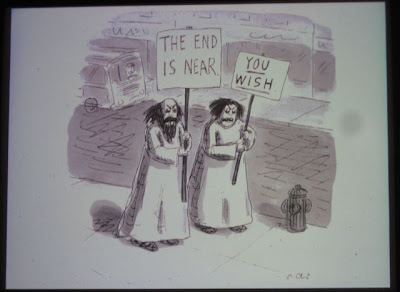 A classic Chast cartoon.
After dinner came the "Big Event". I hesitate to call it that because, in my opinion every speaker of the weekend was a "Big Event". But this was the one event open to the public and definitely was given top billing for the weekend and that was the "Evening With Matt Groening". 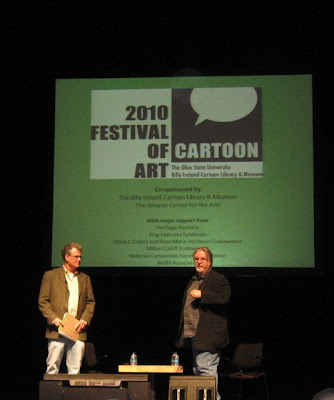 It was conducted largely as an interview between Matt and Tom Gammill (read more about Tom here) and consisted primarily of the history of the Simpsons and some stories from Matt's family. We learned that his real parents names are Homer and Marge and his siblings are Lisa and Maggie. He also showed a number of great Simpsons clips, including one that featured a multitude of references to comics, and then showed some of the arguments that go on at his house between his two sons. This I found particularly funny as much of the dialogue seems to have come from my own two sons. I have often said that I feel as though I'm living in a continual Monty Python sketch, populated by one pointless, tit for tat, argument after another. Generally about things such as whether or not a hedgehog could build a rocket ship given the right set of variables.
We were also treated to a sneak peak at the upcoming Treehouse of Horror episode. We were sworn to secrecy about the contents. Sorry.
After the presentation, there was an opportunity for Q & A with Matt. This was probably the most disappointing part of the weekend for me. All the previous sessions had featured some really nice questions - this session quickly devolved into - "I've watched the Simpsons all my life, can you please sign my (insert item here). When we got to the point where a fan asked if he could pull on Matt's beard for good luck, it got pretty uncomfortable. Ultimately, I think Matt was whisked out of the theater through a subterranean passage or something - kind of reminiscent of Elvis or The Beatles. 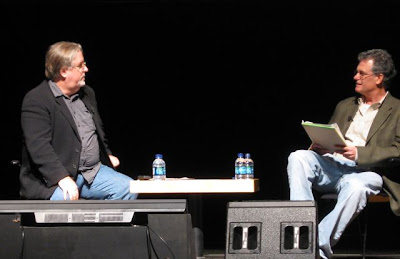 "Sorry, I can't sign anything tonight."
Anyway, it was nice to see him - he attended all the other presentations for the weekend and seemed to be a really nice guy.
All in all, it was a great weekend. There were terrific speakers, John got to sell some Edison books, and we got to see some good friends and hang out together without all the pomp and awards pressure of the Reubens. The next festival will be in 2013 - I highly recommend you put it on your calendar now.
Posted by Anne Hambrock at 10/27/2010 12:42:00 PM