New Features Over On Spot The Cartoonist

I've added some exciting new links to Spot The Cartoonist. Now, in addition to being your source for cartoonist public appearances, STC offers links to interesting cartoonist sightings on the internet.

First we have a link to the fabulous cartoonist interviewer extraordinaire Tom Racine and his Tall Tale Radio podcast.

Then there is the link to meeting cartoonists vicariously through Tom Gammill with his "Learn To Draw Video" series.

And lastly, I have put together a Spot The Cartoonist Youtube channel where you can watch cartoonists at their drawing boards. (Or ipads, or wacom tablets)

So head on over to Spot The Cartoonist and connect (one way or another) with your favorite cartoonists today!
Posted by Anne Hambrock at 6/25/2011 01:52:00 PM 0 comments

Tom Gammill has posted his "official" (as in , not my bootlegged) version of the hilarious Arnie and Caroline Roth video. You can view it by clicking here.
Posted by Anne Hambrock at 6/23/2011 07:46:00 AM 0 comments

We have been trying to upgrade John's blog (you may notice he hardly ever posts anything there anymore) so that it will be more interactive. This has involved a steep learning curve on our end. His current blog is in an old version of wordpress and is all set up in code so trying to make changes to it has been difficult for us. I currently know how to use Typepad (Spot The Cartoonist and Overbooked and Underpaid) and Blogger (this blog) but have had some difficulty learning the version of Wordpress that John is currently using but we are working our way through stuff and you should notice changes starting to happen at a (hopefully) rapid pace.

One significant change already in place is the addition of  a "Categories" link in the sidebar. No longer will you have to go wandering willy nilly through the monthly archives to find the posts about John's Journey To Syndication or similar posts. (Although the posts still come up in reverse order so you'll have to scroll back to the beginning.)

Hopefully this simple change will make the blog more user friendly to you, our loyal readers.

This is another of the films by Tom Gammill that had us rolling at the Reuben awards. I couldn't post it earlier because A) my handheld camera didn't do it justice and B) Tom had asked me to wait until he had gotten all the proper attributions. 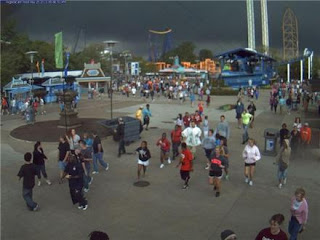 This year, as last year, Tom Gammill was the master of ceremonies for the Reuben Award Banquet. Along with presiding over the evening in general, he produced a series of short videos that were nothing short of hilarious. I'll be doing a long post about the Reuben weekend in general next week but, in the meantime  Tom, Arnie and Caroline have graciously given me permission to post this particular video. It will eventually be available on youtube as part of Tom Gammill's "Learn To Draw" series as will, (hopefully) several of the others. (There was a parody of a Ken Burns documentary - complete with violin music - that was sheer genius!)

(BTW I apologize in advance for some sloppy camera holding on my part and a couple people walking in front of me but one of the reasons I've posted this version is so that you can hear the crowd reaction.)