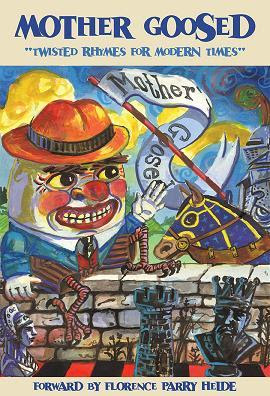 John is part of an exciting book project titled "Mother Goosed - Twisted Rhymes For Modern Times. This is the first book to be published by the new non-profit Southport Publishing and launches this Saturday November 14th. You can find more details and all things "Mother Goosed" related at the official Mother Goosed Blog. Here also is a calendar of events for the launch of the book. And here is the interview John and his colleagues Chet Griffith and John Bloner did with the local NPR station this morning.
The above cover art is the work of Dianne Levesque.
Posted by Anne Hambrock at 11/10/2009 11:34:00 AM 0 comments

What happened to the Striptoonist?

Does anyone know what happened to the Striptoonist? I was really enjoying this site - it was so nice to see someone posting their favorites rather than their "unfavorites". I hope it comes back - otherwise it perpetuates the "the internet is only about snark" argument.
Posted by Anne Hambrock at 11/10/2009 10:17:00 AM 2 comments

Comics news has been slow lately so I'm posting some of my "non comic strip" writing. I'm not sure if I'll ever illustrate this poem or push to publish it formally anytime soon, but I have taken the trouble to copyright it.
Socks
It wasn't a terribly special sock.
It wasn't striped or brightly colored.
It wasn't hand knit, nor was it made of fine or exotic materials.
Not alpaca wool, not silk, not carefully harvested sustainably produced bamboo fiber.
It wasn't a fashionable sock - inviting all to admire the sophistication of the ankle it adorned.
It wasn't a high tech sock - wicking away sweat and other nasty fluids in an effort to maintain a perfect and harmonious foot hygene.
No - it wasn't a terribly special sock.
But it was an important sock.
In fact the most important kind of sock.
The sock that is... missing.
That was all, it was missing.
But somehow the fact that it was missing was everything.
The fact that it was missing was the tipping point.
She knew that, if she found it, all harmony would restore to the cosmos.
Her corner of it anyway.
Her children would become bright, shiny, and successful - winning Nobel prizes, changing the world. They would be the sort of organized capable people who did great things. And, most importantly, they would pass this organization gene on to the next generation of bright and shiny grandchildren.
And the glory would be hers.
Because she was the root.
The genesis of all the bright, shiny capableness that was to come.
She had taught them everything.
But...
It was missing.
And if it remained missing - well, the result was chaos.
The children would drop out of school.
They would never earn more than minimum wage.
Hell, they might even end up in prison.
And then, worst of all, they would pass on that hopeless, helpless, unorganized, incapable genetic material until the end of time.
Because she was the mother.
And they always blame the mother.
Copyright © 2008 by Anne Morse-Hambrock, all rights reserved.
Posted by Anne Hambrock at 11/04/2009 02:11:00 PM 5 comments