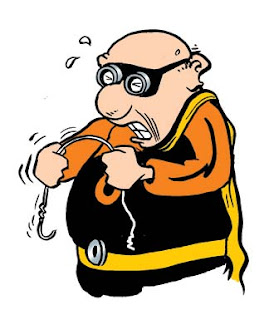 I don't know if it was the fact that the San Diego Comic-Con was last week or maybe there is something in the water but there are a lot of new superheroes running around the comics pages lately.

In Edisonland Orville has become a pawn in Edison's scheme to turn him into "The World's Best Superhero", Between Friends is in the middle of a story arc surrounding "Hot Flash Woman" and Real Life Adventures got in on the act yesterday as well.

In fact, in our local paper, Edison and Real Life Adventures are right next to each other so the juxtaposition was pretty funny.

Here are some samples - be sure to visit edisonleecomic.com and betweenfriendscomics.com to read the rest of the series. And you can find Real Life Adventures on gocomics here.

(Here's a tip - your best chance to win is to make John laugh out loud as the comment shown above most definitely did. You needn't be reverent - go ahead and poke fun at the joke or the characters - (although comments like "this strip totally sucks" are not likely to earn you the prize.))

Get out there and comment on Brilliant Mind of Edison Lee comic strips today!!!

Note: These links may take you to the page for 7/29 - use the forward buttons on each site to get current strips 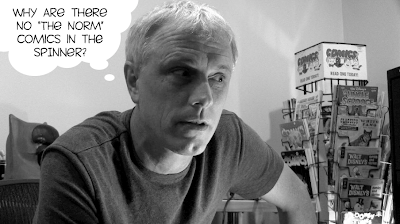 Michael Jantze, animator, director, and creator of the terrific comic "The Norm" has started an Indiegogo campaign to fund a new book collection of "Norm" strips. The campaign is going well so Michael has announced some great new stretch goals if he surpasses his initial funding request.

This will be a great book and if you would like a piece of the action - and the satisfaction that comes from being a contributor to great creative projects - head on over and pledge today!! (I'm contributing as soon as I finish this post!) 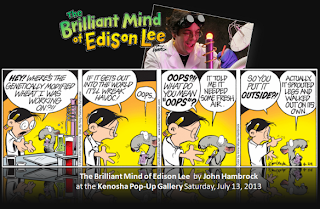 A new thing has started in Kenosha. It's called a Pop-Up Gallery and is put on by the Kenosha Art Association. The gallery exists for one night only (hence "Pop-Up") in downtown Kenosha and happens on the second Saturday of the month.

This Saturday John's original art for The Brilliant Mind of Edison Lee will be featured along with Mini-book publisher John Porcellino, "Just Say Uncle"'s Dan Pavelich, "Buni"'s Ryan Pagelow and others.

Along with the work on display John will be selling original art, prints, books and some new Edison goodies. There will be something for every budget.

So head on over this Saturday and bring all your friends!!

One of Edison’s favorite things is meeting famous cartoonists. Over the past 7 years he’s put together a pretty awesome photo album of the folks he’s met and John is now sharing them over on his King blog. Click here to see the first one.
Posted by Anne Hambrock at 7/11/2013 08:52:00 AM 0 comments

From The Archives - Know Your Scales

When this ran back in 2010 it got more mail than any previous individual Edison strip. Why you ask? Is it because it made fun of overweight people?

Because it offended folks who want to colonize the moon?

Because it has the wrong kind of scale for the joke?

Apparently for this joke to work properly the man should have been standing on a pressure sensitive scale - you know, like the average person has in their bathroom. NOT, we were informed, the scale pictured here. THIS type of scale would still be accurate, due to its use of counterweights, even on the moon.

And, if we'd really stopped to think about it, we would have known that. And the point the readers hit us with was that, as a strip that uses a lot of science, we SHOULD have known that.

But the truth of the matter is your run-of-the-mill bathroom scale just isn't that interesting to draw. Nor is it a particularly funny visual.

At the end of the day, Edison is a comic strip and we will probably continue to make little boo boos like this just because the dang doctor's scale is more fun to draw.
Posted by Anne Hambrock at 7/10/2013 12:50:00 PM 0 comments

The Kenosha Festival of Cartooning is taking a year away from its full 3 day event and presenting a terrific 1 day Mini-fest with special Guest Tom Richmond of MAD magazine and The MAD Art of Caricature!

The Mini-fest will take place all day on Saturday November 2, 2013 in Kenosha, Wisconsin. Click here to visit the Festival Website for a list of the day's activities.

Last year the festival was tremendously fortunate to successfully raise almost its entire operating budget through Kickstarter but 9% of the total funds raised went to Amazon and Kickstarter for payment processing. This year the festival is hoping to follow the Kickstarter model and offer backer rewards but  skip actually using Kickstarter and use the Festival Paypal account instead. This will save 6% in processing fees and make your donation go farther!! 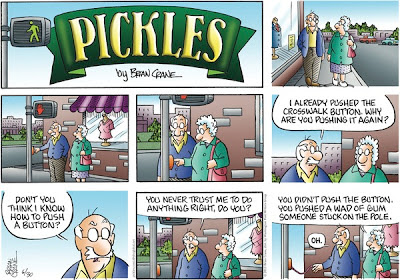 CLARIFICATION: Pickles is one of John's favorite strips too! I just have started to put my name in the blog posts so folks don't get confused about who blogs about what. For John's latest blog post click here.
Posted by Anne Hambrock at 7/01/2013 02:36:00 PM 4 comments