Many comics are doing strips about the oil spill in the gulf. This week Sherman's Lagoon jumped in - I'm very interested to see where Jim Toomey will take things as I assume all the strips will be from the point of view of ocean dwelling creatures.

Edison will be doing oil spill strips as well but from a slightly different angle. Tune in starting July 5th to see how John decided to handle it.
Posted by Anne Hambrock at 6/30/2010 04:39:00 PM 0 comments

Email ThisBlogThis!Share to TwitterShare to FacebookShare to Pinterest
Labels: Behind The Strip, Oil Spill Series

We love the look of the Edison website, (I am especially fond of the bright colors and how they look on my ipad) but it has long been overdue for some updates. So watch out over the next week or two for some changes.
The first - which has just happened while I was typing this - is on the samples page which is currently called "The Edison Files". The previous crop of samples were from the first 6 months of the strip and were incredibly outdated.
Putting new samples up has been a goal for over a year but between one thing (we are incapable of making any changes to our own site and must count on other people to do it) and another (we only this week finally got around to actually picking out new ones) it just didn't get done.
I want to take a minute and address that first issue. John and I are programming and code idiots. And our brains are middle aged (and stretched too thin) - which means it doesn't look as though programming is a skill set we are going to master any time soon. So we have had to depend on the programming skills of others. Until now those other people have either been A) Too busy, B) Unable to handle the code either - this from someone who actually makes their living setting up websites - go figure - or C) Expensive. And this brings me to something I never see addressed in the whole print vs. web debate that springs up over on The Daily Cartoonist.
I never see anyone talking about how much you need to know about programming and the internet to get a successful webcomic going. You need to know a lot. And you often need a lot of time to learn it all. And if you are already working another job while you try to get your comic off the ground, that time is really hard to come by. And if you are not twenty something and get all this stuff intuitively, you are going to not only need to find time, but money for a class. Or else you need to pay someone else to do everything for you. Which is going to be tough if you're just starting out and have no start up capital.
So what we finally did was get our 19 year old genius son to do it :-)
So enjoy the new samples - the dailies are now in full color in addition to the Sundays.
I'll update other changes as they happen.
Posted by Anne Hambrock at 6/30/2010 01:27:00 PM 0 comments

This week Tom Racine interviews Piers Baker, creator of the wonderful strip Ollie and Quentin.
Pop over there and check it out!
And while you're at it, be sure to read Piers blog - I love the Sunday Hyperlinks he just posted :-)
Posted by Anne Hambrock at 6/28/2010 07:49:00 AM 1 comments

Congratulations to Tony - he made it! You can read more here.
Thanks to all of you who pledged, I 'm really looking forward to my first issue!

John and I just finished donating to a terrific project called Coffee Talk. Started by cartoonist Tony Murphy (It's All About You), it will be a newspaper composed completely of comics and will be available in coffee houses. You can read all about the project and make a donation here.

It looks as though Tony will be offering some great comics including Norm Feuti's Mr. Zimby. I love the retro look of this comic and am happy that it might be getting a chance to appear in print.
Best of luck Tony!
Everybody go donate - it's super easy, since it's through Amazon you can use a major credit card, and you can donate as little as a dollar or as much as a thousand dollars (I'm sure Tony would love you for that) and the money is only charged to your account after full funding of the project is confirmed. If he doesn't make it, there is no risk to you that you'll lose your money.
There are only 6 days left and over $2500 to go! So hurry!
UPDATE: It's going well but there are only 61 hours to go and the goal is still $2000 short - if you haven't pledged yet, please hop over there and help make it happen.
Posted by Anne Hambrock at 6/17/2010 06:03:00 PM 0 comments

Tom Racine of Tall Tale Radio very nicely asked us to do another interview which is now up here.
I would ask that before you listen to this interview you would take into account that we were a tad sleep deprived and also recovering from the New Jersey Revelry - the older one gets the longer the recovery process takes :-)
I say this because, as I listened to it this morning I realized that, A) I seem to have felt the need to talk very loudly this time, B) I interrupted Tom at least 3 times - maybe more and C) I blathered.
Part of this I put down to Tom's ability to put you so at ease that you feel as if you are just shooting the breeze over drinks with a friend. Which is why I sound like I'm at a bar :-)
Regardless, thank you so much, Tom for all your support of Edison - we really appreciate it.
Posted by Anne Hambrock at 6/14/2010 07:39:00 AM 2 comments

We interrupt the Reubens wrap up posts (parts 3 and 4 still to come) to bring you this review of Ironman 2. (Warning - this post is long and contains spoilers.) 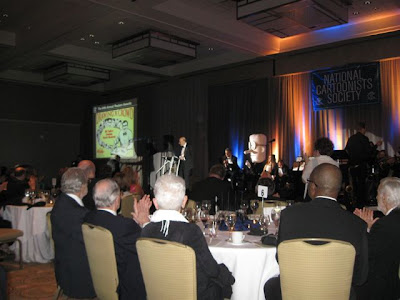 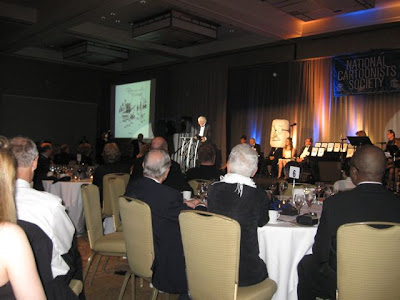 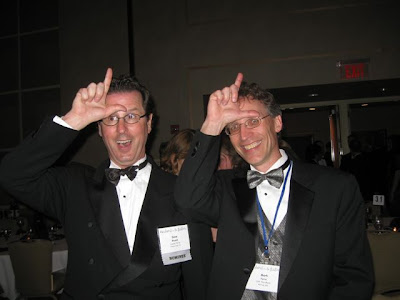 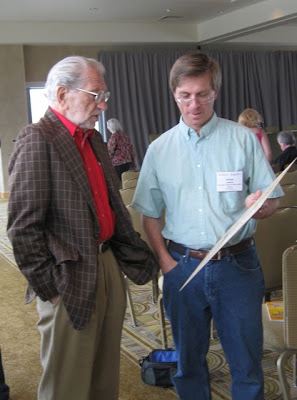 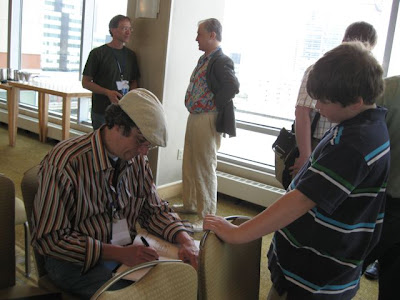 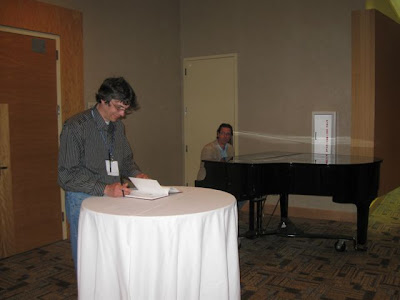 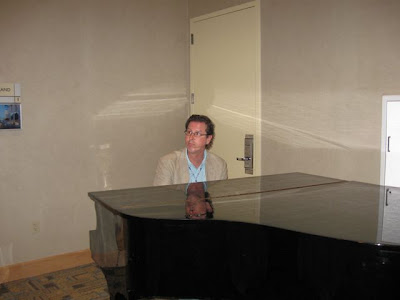 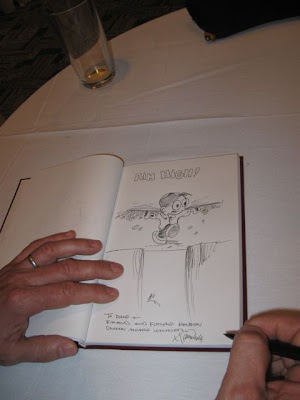 Reubens on the Hudson pt 1 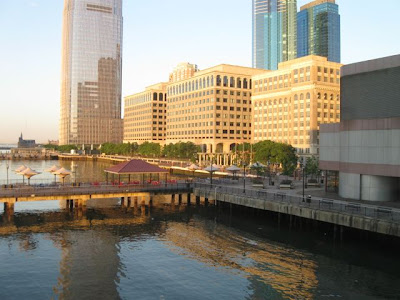 Well we're back!
In the interest of timeliness I will be posting about the weekend in stages as I get organized.
I'm going to start with the posed cocktail type shots because there are a boatload of those and I want to get them out of the way :-)
You will notice that most of these fall into the "John standing next to someone famous" category. This is because of all the cocktail parties that happen at the Reubens - I think I counted about 12. Well..... maybe only 5 but, still - it's a weekend with a lot of standing around drinking and talking.
And for me that usually includes high heels. I added it up and I spent total of 18 1/2 hours standing with a drink in my hand. That includes the marathon session on Saturday - about 2 hours before the awards ceremony and 5 1/2 hours after that. (This would be because all the hobnobbing carries on until 2-4 a.m. each night). Needless to say, my knees and feet are still recovering. (Would totally do it all over again, though!)
Here goes: 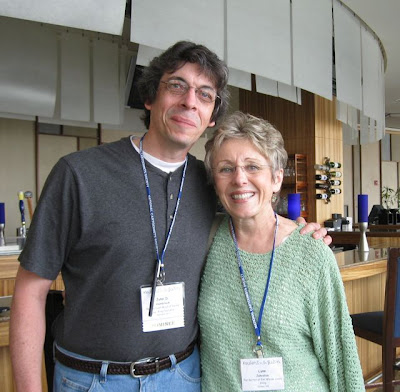 John with Lynn Johnston - I need to put a little explanation by this one: when John got his development deal with King Features, I contacted Ms. Johnston for guidance. She not only called John, but spent about an hour giving him some very important advice and also the name of Stu Rees, Intellectual Property Lawyer Extraordinaire. John knew at the time that this was a generous act on the part of Ms. Johnston, but now that he is in the trenches of producing a daily strip he really understands how hard an hour of non strip time is to come by. Thanks again to Lynn so much! 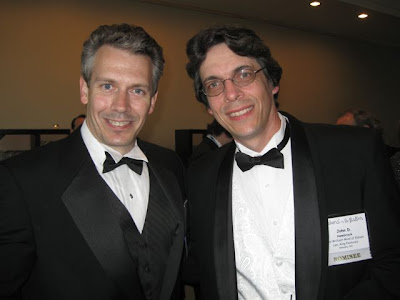 With Tom Richmond, winner of this year's NCS award for Best Newspaper Illustration 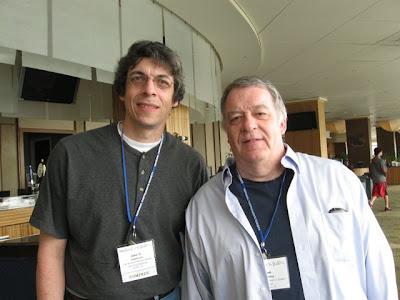 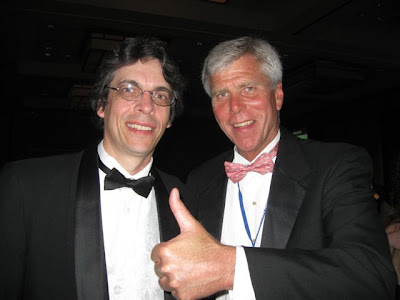 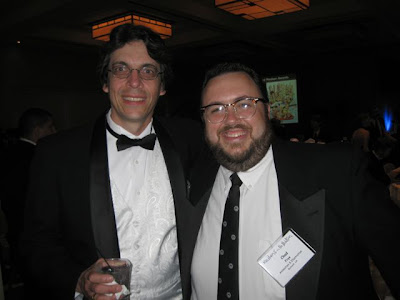 With Chad Frye - note how I have cleverly positioned them so that John appears to be wearing an illuminated mortar board. 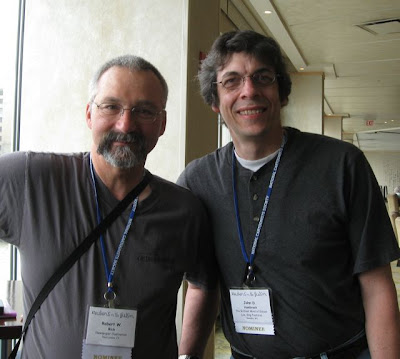 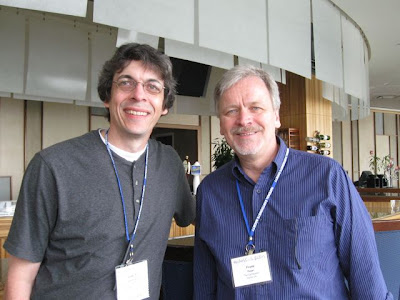 With Frank Pauer - Editor of "The Cartoonist" 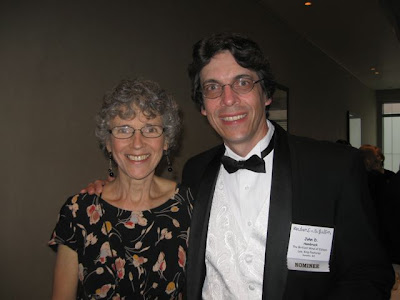 With Anne Gibbons
With Dan Thompson, Dave Blazek - nominee for Best Newspaper Panel Cartoon, and Bucky Jones
Sam Viviano (Vivainio), Frank Caruso, and Patrick McDonnell - another note - if you have not seen this video on how to get your work into Mad Magazine you must watch it right now! 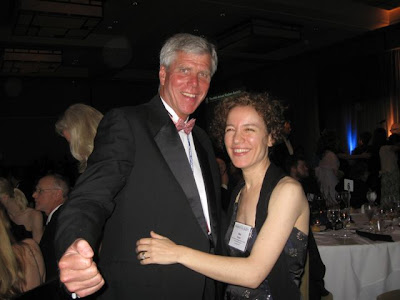 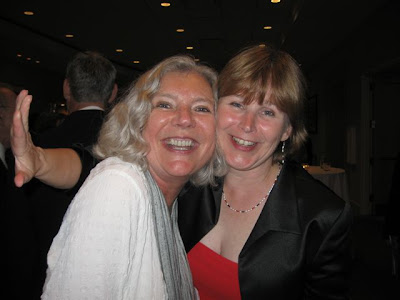 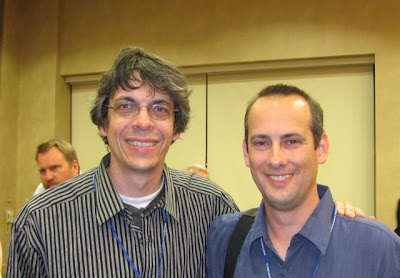 With Norm Feuti - apologies John - I think I ran your hair through a blender before I took this one :-) 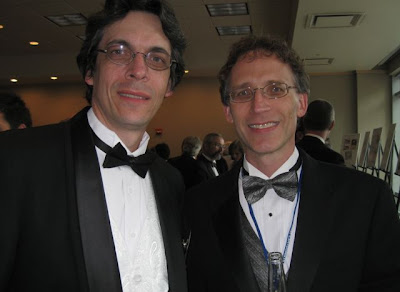 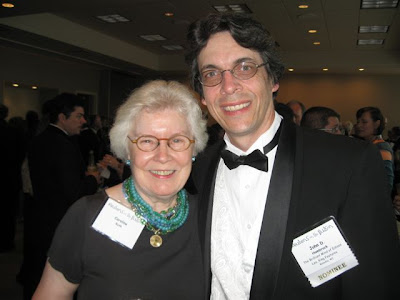 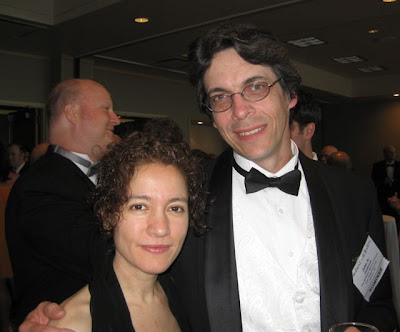