Behind The Scenes: More 2013 Favorites

Two weeks ago I posted some of my favorite Edison strips from 2013 and promised another installment a week later. Forgetting that I was also running an Indiegogo campaign for the Kenosha Festival of Cartooning :-)

Here, a wee bit late, are some more of my fav's from the past year:

Obviously this strip was inspired by the many amazingly stupid commercials John and I are subjected to whilst inking and coloring strips with the TV on.

The Lemonade stand has become a fertile theme for Edison - combine it with his overwhelming need to take advantage of Harley and you get this strip. Years ago we had two young nephews. (we still have the nephews, they're just not that young anymore) One of the boys was older than the other by 5 years and during a family visit I witnessed the older boy saying to the younger boy: "Hey Matt! I'll give you this nice big nickel for that little bitty dime!" Their mother looked at me and said "Whenever I hear the words 'Hey Matt!" I know somewhere that kid is getting the short end of the stick."

That pretty much sums up the relationship between Edison and his cousin Harley.

I'll admit I'm a sucker for vibrant color and insert it into the strip whenever possible. It makes my job even more fun and when I am working on a strip like this one I sometimes am awestruck by the fact that I am married to this phenomenal artist....

Poor Harley - taken advantage of and manipulated once again....

One of John's earliest comedic devices in the strip was his use of Rube Goldberg type contraptions. This is the most recent one.
Posted by Anne Hambrock at 4/12/2014 12:04:00 AM 0 comments

John has dug through his Brilliant Mind of Edison Lee ephemera and come up with King Features Sales Kits from the original 2006 launch to offer for the Kenosha Festival of Cartooning fundraising campaign on Indiegogo!

The full color kit, with illustrations on the front and back covers as well as the inside front cover, is on 100 lb card stock with a pocket containing: 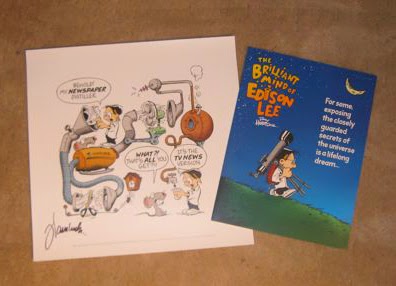 He also unearthed copies of a special 14 x14 inch square promotional poster designed especially for newspaper editors - the invention depicted is that of a "Newspaper Distiller" and the joke centers around the relationship between newspapers and TV news. 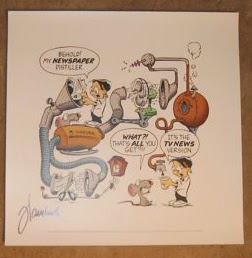