John and I had the privilege of attending the 30th Festival of Cartoon Art at Ohio State last week. As usual it was a fabulous event packed with great presentations, the grand opening of the new Billy Ireland Library & Museum of Cartoon Art, and a screening of the documentary "Stripped".

We toured the current gallery show "Substance and Shadow" curated by Brian Walker and also the Treasures Gallery. For those of you unfamiliar with OSU's fabulous archive they are the world's leading repository of cartoon art originals. Stunningly, I failed to take even one picture of the exhibit! I think A) I was having too good a time ogling the artwork with envy B) I may have had a vague idea that photos were prohibited.

Regardless, photos cannot really do the shows justice, you should simply go to OSU and see the exhibits in person! But, if you insist on searching for exhibit photos Mike Peterson has some good ones - plus an extensive recap of the festival itself - over on Comic Strip of The Day.

There were presentations by Matt Bors, Eddie Campbell, Brian Bassett, Paul Pope, Jeff Smith, Stephan Pastis, The Hernandez Brothers, and Kazu Kibuishi. We saw most of them and greatly enjoyed seeing the process these artists go through to produce their terrific work! UPDATE - thanks to Alan Gardener and Stacy Curtis for helping me identify Politico cartoonist Matt Wuerker in the photo below. I remember being introduced but there's always such a huge number of cartoonists to meet at these things I just couldn't remember everyone! 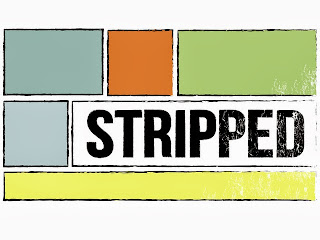 The festival audience was also given the chance to see the documentary "Stripped" for its first screening. I have to confess I had mixed feelings about the film. It seems to be two films in one. The first is a documentary narrative on newspaper comics  - their place in history and extensive interviews with some of the most famous cartoonists of our time - including the elusive Bill Watterson. (Watterson does not appear on camera but we do get to hear his voice.) I greatly enjoyed this part of the film - especially the heartfelt opening featuring Cathy Guisewite and her memories of reading the Sunday Funnies. The film is extremely well produced - rivaling anything programmed by PBS.

But there is another film inside this documentary that is an editorial comment on the state of the comics business today. I enjoyed seeing the work of popular webcomic artists and hearing their stories but could have done without the editorial tone of the filmmakers. It felt like a film in search of an argument rather than a look toward the future. I also have to wonder if this part of the film will be appealing to general audiences who might be unaware of past rifts between web and print cartoonists.

Despite this I enjoyed the film and would recommend it to fans of comics.

Probably the best part of the weekend, though, is simply the opportunity to eat and drink and hang out with cartoonists - something we did in abundance :-)

Rally The Troops! Keep Edison Lee In The Oregonian!

Yesterday we heard from several readers of the Oregonian that were disappointed to find Edison Lee had been pulled from the comics line-up. Edison has been part of the Oregonian for over 7 years - almost since its launch - and we know there are a lot of loyal fans out in their circulation area.

The Oregonian is actually soliciting reader feedback and it sounds as though it might actually affect their decision - something rare in a newspaper these days!

So please, if you are an Oregonian reader who wants to see Edison back on your comics page follow this link and make your voice heard!!  Oregonian feedback  (You have to register to comment  - you can also contact editor Therese Bottomly on her facebook page or twitter account)
Posted by Anne Hambrock at 11/05/2013 01:03:00 PM 0 comments