What To Do With Your Old Bluejeans 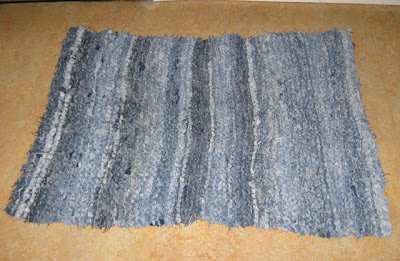 My oldest son left for college this year. This resulted in our observance of the ritual known as "The Giving Up Of The Room". A ritual observed in households all across America - you oldest children know what I'm talking about. As an oldest child myself, I remember well the months of clearing through crap and the sound of my sister taking possession of my room with whoops of glee.  I don't think the ink was dry on my college acceptance letter before she began hatching her plans for the takeover. This summer, our house was no exception. Son #2 spent months regaling son #1 with his grand visions for his new space.
The part of the ritual I was not familiar with is the role of the mom, or as I came to see myself, "she who must clean up the mess and figure out what to keep in storage, what to send to Goodwill, and what to pitch".
Which brings us to the blue jeans.  Lots of blue jeans. Years of blue jeans.
Blue jeans that were too small to wear anymore as well as too crappy to give to Goodwill. And somehow, there were too many to throw away. Looking at the enormous pile, I felt a surge of guilt at the thought of adding that much bulk to a landfill.
So I started looking around the internet. I knew I remembered hearing about companies making insulation or something out of old blue jeans and, sure enough, I found a lot of sites that claimed to accept old blue jeans for recycling.
I say "claimed" because every site I found said something to the effect "Don't send us anymore blue jeans - we're full!!!!!"
Which isn't all that surprising if you think about it. Take a look around you the next time you are out in public anywhere. There are a lot of people wearing blue jeans. They're practically a national uniform.
So now what?!
Well, it just so happened, I had a book checked out of the library at that time called "Eco-craft" that had a suggestion for making a rug out of old sweaters. I thought, "Why not a rug out of blue jeans?".
So here I offer you, for anyone who is interested in a useful thing to do with old blue jeans, my journey to a rug.
This rug is knit using garter stitch (the very simplest knitting stitch) on size 15 needles with a long plastic extension in the middle so you can handle the width.
So, to start, you have to take apart the jeans. I found it best to take off the pockets first. You'll need a good strong seam ripper. 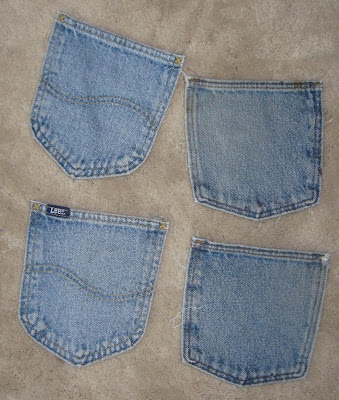 Next, comes deconstructing the legs. Most jeans have extra thick reinforced double stitched seams everywhere so the best thing I found was to just cut the jeans up and skip trying to undo the seams. This will leave you with a "jean skeleton" that looks like this: 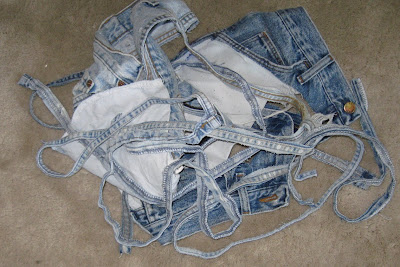 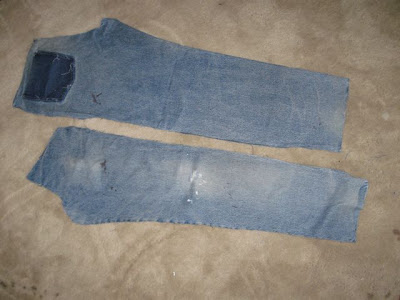 I experimented with a couple different ways of cutting and finally settled on a spiral starting from the outside edge of each piece. This gives the longest possible piece for knitting up later. Don't make the piece too thick (it will be difficult to handle) or too thin (due to the way denim frays, pieces that are too thin will eventually separate and break, making a hole in the rug).

When you've finished cutting, wind it into a ball like this. 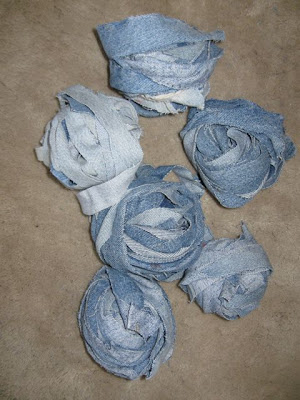 Once you have all your jeans cut up and wound into balls, decide how wide you want the rug to be and cast on as many stitches as you need for that width. Then just knit back and forth in garter stitch until the rug is as long as you want it to be. (Or you run out of material :-)).
As you get to the end of each ball of "yarn" you'll need to add the new ball. I found the best method was to sort of overlap about 6-8 inches of the tails (so that you are briefly knitting two strands at once) rather than tying the strips in knots. The knots had a tendency to show and also to make bumps in the rug. Some of them also frayed and fell apart.  Once the rug is finished, you can trim down any of the overlapped bits that are sticking out. 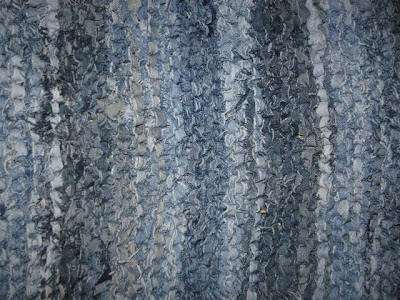 Email ThisBlogThis!Share to TwitterShare to FacebookShare to Pinterest
Labels: Earth Day and Such