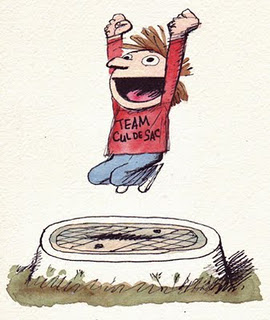 John was very honored to do a piece for the Team Cul De Sac book. (I have a copy of the art somewhere and will find and post it eventually). For those of you who have been living under a rock and don't know, Cul de Sac is a fabulous comic strip by Richard Thompson. A couple of years ago Richard was diagnosed with Parkinson's Disease (he is currently putting the strip on hiatus to undergo therapy, which you can read about here.) And Team Cul de Sac is an effort spearheaded by Chris Sparks to raise money for the Michael J. Fox Foundation and overall research for Parkinson's.

Jillions of cartoonists - including the reclusive Bill Watterson - did art featuring Richard's characters that was included in this book and also an art auction. All to raise money for the foundation.