Smaller Than a Dime 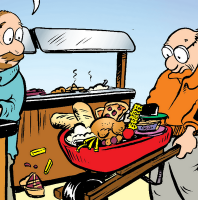 I came across this post by Tom Richmond the other day. In it he shows a portion of an illustration he colored. He spent over 20 minutes on it, later to realize the final image would be smaller than a dime. This came to represent a waste of time on his part and he has since changed the level of detail in his coloring. I absolutely understand his reasoning and accept his decision, especially as Tom frequently works on large, very intricate illustrations.
Only, here's the thing....
Pretty much everything I color turns out smaller than a dime :-) 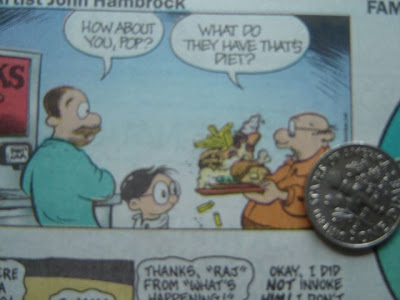 I easily spent 20 minutes coloring all this food (some of you may remember it from an earlier post). And, if the dime in these photos doesn't give you a proper sense of scale, to the right of Orville in the second picture is the head of one of the kids from family circus. 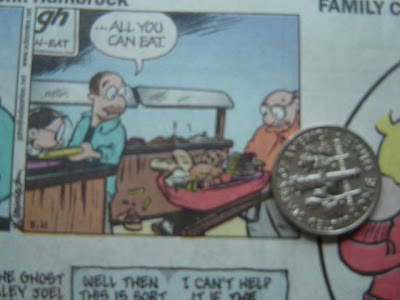 After reading Tom's post, I gave some thought to my coloring process - should I really be scaling back on detail? I decided no. I made this decision based on the fact that, unlike a lot of illustration work that will be primarily viewed in print, what I do is seen every day mostly by people on the internet. Very few of John's print papers actually carry the dailies in color. Not only are the images larger on dailyink and comics kingdom, they have zoom features on those services. It is true that the images have their resolution seriously reduced to save on bandwidth, but I'm going to stick with the detail for now.
Posted by Anne Hambrock at 10/05/2009 06:10:00 AM