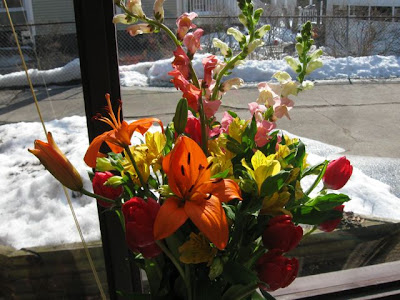 I want Spring! And, in the words of the immortal Veruca Salt, "I want it now!"
As you can see from the above photo, we still have plenty of snow in Wisconsin. I got so crazy with snow/ice/mush fatigue a couple of days ago that I splurged on a nice assortment of cut flowers so that I could at least pretend to have Spring.
It is generally about this time every year that I have, flat out, had enough of Winter. I don't mind Winter - on many levels I actually like it. I truly can't imagine Christmas in the land of cactus. Or palm trees either, for that matter. It's just that Winter lasts too long. I think five to six weeks would be a nice amount.
Early Spring in Wisconsin brings the promise of wonderful weather to come, usually round about late March to early April. This promise lingers.
And lingers.
And lingers.
Until about the middle of June, when the temperatures that have spent six to eight weeks hovering between 30 and  50 degrees, finally decide to inch up into the 70s.
Then we get lovely summer weather that lasts until almost the middle of October. (I have spent many a Halloween picking the last peppers and tomatoes from our garden)
We then get something vaguely resembling Autumn for roughly three to five weeks and then, BAM! Back to Winter again.
So that's it, really. Two seasons. Winter and Summer with small pretendy bits of Spring and Autumn.
No wonder Winter seems so long :-)
Update: Apparently throwing little Veruca like tantrums works because yesterday was sunny, almost 60 degrees and gorgeous. No more snow!
It doesn't mean we won't still get one more good blizzard in before May but I have my fingers crossed.
Posted by Anne Hambrock at 3/17/2010 07:13:00 AM