Heading to the Reubens 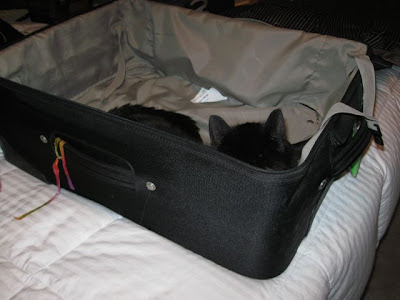 I hope the hotel likes cats because apparently ours is coming with :-)
Seriously, it's time to head to New Jersey for the Reubens. This year, partly because of my airline boycott, but for other reasons as well, we are driving. And I'm actually looking forward to the time on the road. While road trips can be tedious, they can also be great adventures. In fact, as I think back over my various travels, my airline travel stories are generally ones of aggravation and annoyance while most of the best and funniest memories have been the trips where we drove.
There was the trip to Florida in 2005 - our Honda Odyssey was brand spanking new, so new in fact, that we were unaware of a few little things about it. The salesman had been excellent about showing us all the little secret storage compartments and the copious number of cupholders, and how the rear seats folded into the floor and how to rearrange the middle seats. He had not told us about the built in "security system". That little gem we discovered for ourselves on Lookout Mountain in Tennessee.
Apparently, if everyone except one person gets out of the van and one person hits the autolock button on the keyring and then the last person in the van opens the door from inside, the car alarm goes off.
And keeps going off.
And a red light (which is not pictured on the dashboard schematic in the owner's manual) starts flashing.
As we didn't even know the car had an alarm, we were pretty confused. I think I remember one of the kids asking if the car was going to explode and was trying to warn us to get away from it.
Even more confusing was the fact that it turns out the system is on a timer. So when everything stops honking and flashing after five minutes and you think you're safe - five minutes after that it all starts up again. In a parking lot full of tourists. Who are staring at you. And who are pretty sure you are a certifiable idiot as you are whipping through the manual desperately trying to figure out how to shut this thing down and your husband has the hood open to see if there's anything helpful in there and your kids are running around in circles screaming "We're all going to die!"
So you do the only sensible thing you can think of, which is to pile everyone back into the honking van, slam the doors, and drive honking back down the mountain away from said tourists while frantically dialing the dealership for help.
The last hilarious bit was when, after pulling into a gas station and finally connected to someone at the dealership he says to tell my husband to get out, go around to the passenger side and unlock the door with the key. There is no keyhole. "Oh." he says. Five minutes later we will finally resolve the situation by hitting the "lock" and then the "unlock" button on the keychain. This educated not only us, on the future disarming of the system, but the guy at the dealership as well.
Or the time in Michigan when we had our gigantic suitcase - the old fashioned kind that measures 36x48 - bungeed to the top of our little Honda Civic. I'm on I75 which has a speed limit of 75 or 80 mph so I'm going at a pretty good clip. John is asleep in the passenger seat and some of the bungees break loose. The wind catches the suitcase and whips it off the top of the car sideways. The chords on my side have held, so the suitcase is now dangling next to my driver's side window. Picture the opening credits of the Flintsones when they put the big steak on the car and the whole thing tips over. I still insist that if John - who is a foot taller than me and weighs, well, more than me, had been driving, we would have wound up on two wheels.
As it was, I managed to ease the car over to the left shoulder. John woke up and said "I'm pretty sure we can't stop here."
I just pointed out my window to the precariously positioned suitcase. Enough said.
There are many, many stories like that from my times on the road. I'm not sure if we'll get any more from this trip but if we do, you'll be the first to know. 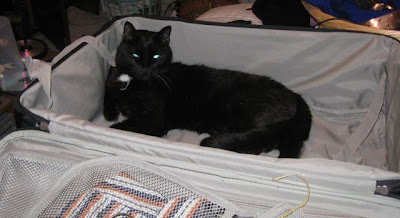