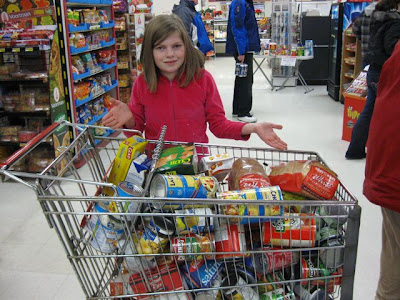 Excuse me, it's Sunday and I'm going to take a little time to Sermonize.
I don't know about where you live, but here it's cold. Bitterly cold.
And we have homeless people - many of them families with young children.
We have several programs for the homeless in our community, both for food and temporary shelter and round about November and December, every time I turn around it seems there is a food or clothing drive for the food pantry and the shelter.
This is a good thing.
But now it's January and the time of year that the eyes of the public tend to stray from such drives. Especially with the crisis of Haiti to take up the media's attention.
Don't get me wrong - I am in no way suggesting that we should not be reaching out to the Haiti earthquake victims in their time of such great need - I am just reminding you that you probably have many many people who need your compassion as well in your own back yard.
We are regular contributers to our local food pantry. For years, my oldest son used to have  a carnival in our yard for all our friends and neighbors. He started it when he was 5 with the express purpose of donating the proceeds to the pantry. (I think he got the idea when I told him how, in my childhood, we were always having carnivals for MS) Anyway, every year, he and John would build a contraption for the carnival - there was a complicated "sucker push"  (I can't remember how that one worked exactly), a skeeball, a sponge throw (with a face cut out for the willing victim) among others, as well as a variety of games.
By the time we shelled out the $ for all the prizes and game materials, I think we were usually about $75 in the hole, but that was beside the point. The neighborhood turned out and had a good time and the pride my son took in taking the proceeds to the pantry was immeasurable.
We stopped the carnivals when he was about 14, I think, and took to just sending a check every November and food to all the church and school drives. And we felt we were doing our part.
But something was missing. That engagement  our kids got from doing something themselves was lacking.
So, a couple of weeks ago, while Alex was still back from college, I took all three kids down to the local grocery store, gave them each a set amount and a calculator, and challenged them to see how much food for the pantry they could each buy. To the winner would go a homemade apple pie. (My kids kill for these pies).
It was interesting to see the choices they made - and how much they've learned from me over the years when it comes to stretching a dollar. While the oldest, had the largest number of items by far - 158 - the youngest easily made the most nutritious choices and the middle one probably won the most points for food homeless kids would like most to eat. Because I set the prize on the amount of food, the oldest won - but I may have to rethink my definition of winning for next time and include healthfulness.
I devised a system where, each kid got their own cart and, as they checked their groceries through and they were bagged, I took a sharpie and put their intitials on the bag so we would be able to compare it all later. I also used the grocery receipts.
My mother, who was visiting, also got into the act and bought 25 can openers to donate. I would never have thought of this, but she works regularly at the pantry in her town and she said they never have enough can openers.
It was a terrific experience. Not only did my kids get into it, but, as we hit the checkout the employees got really into it. The next time I came in shopping, several people came up to me to ask who won :-)
The thing that astonished me as we did this, was the real amount of food we were able to amass for roughly what I would pay for two weeks of my regular grocery budget. The kids dropped off 399 items in over 70 bags. My van was full to overflowing.
So I'm asking you today to take a little time and remember those in your community who need your help. I know that, in our area, the job losses have more than tripled the number of folks who are using our food bank and related services.
If you have old coats, gloves and mittens, and you live in a cold climate, take a minute to drop those items off at the appropriate collection site. If you can see your way clear, pick up 10 extra items when you buy groceries and set them aside for a monthly drop off to your local food pantry.
And, if you happen to be a cartoonist, find out if your local shelter needs any artwork for their fundraiser. John currently does not sell original strips but he has donated some to charitable organizations.
Hunger knows no holiday - it doesn't disappear after Christmas.
Posted by Anne Hambrock at 1/31/2010 11:55:00 AM